Understaffing Due To Doubling Down on Nursing Budget Errors 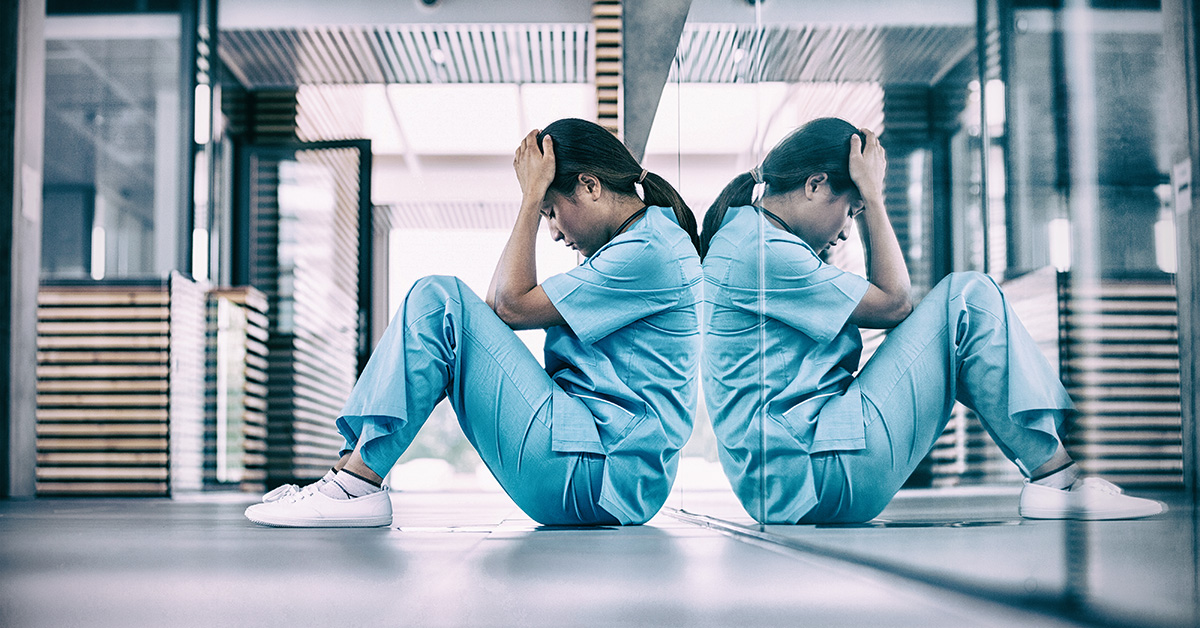 After publishing my articles Flawed Nursing Budget Process Increases Understaffing Risk and A Care-Centric Approach to Nurse Scheduling, a nurse manager contacted me regarding an odd discovery they had made about their nursing FTE budget process.

Their facility not only used the flawed non-productive FTE calculation, but they also introduced a second logic flaw into their budgeting process that further increased their risk of understaffing.

In this article, I’ll explain what I learned about this nurse manager’s budget process and how two separate budget errors contributed to the significant understaffing, overtime, and staff burnout that they were experiencing.

A Quick Review of a Nursing FTE Budget

We’ll use the FTEs from the unit described in A Care-Centric Approach to Nurse Scheduling and the assumption of an 85% Direct Care (Productive) vs. 15% Replacement (Non-productive) split. The size of our sample unit and its Productive/Non-Productive split are similar to that of the unit managed by the nurse manager that reached out to me. Also, we will be using unrounded values in the calculations to avoid any confusion related to the rounding artifacts.

The best-case scenario for Available Replacement Hours in this scenario is 178 hours or 14.8 12-hour shifts per week, assuming the unit is fully hired and has no employees on orientation, leave, or temporarily assigned to another unit.

In addition to using the flawed nursing budget process, this nurse manager’s facility also reallocated 25% of their calculated replacement (non-productive) FTEs to their float pool. We’ll first look at the impact of these combined errors on the available replacement time calculations and then discuss the resulting operational effects.

The flawed replacement FTE formula introduces a -0.67 FTE shortfall into the budget.

The replacement FTE calculation error reduces the Replacement Hours Per Week from 178 to 151.6.

When we calculate the replacement percentage by dividing the 3.79 Replacement FTEs by 28.98 Total FTEs, we get 13.1% replacement instead of the desired 15%.

Furthermore, the 3.79 replacement FTEs represent a replacement percentage of only 12.8% when calculated against the correct Total FTEs of 29.65.

Robbing the Unit to Fund the Float Pool

Let’s now look at how reallocating 25% of the improperly calculated Replacement FTEs to the float pool impacts the Available Replacement Hours for the unit.

Under this methodology, the unit gets to keep only 75% of their calculated Replacement FTEs.

The best-case scenario for replacement hours has now dropped from 178 to 113 hours per week with the two budget errors.

The 2.84 Replacement FTEs represent a best-case replacement percentage of only 9.58% – not the desired 15% – when calculated against the correct Total FTEs of 29.65.

A Recipe for Understaffing, Overtime, and Burnout

The nurse manager I spoke with indicated that, despite using less than their budgeted replacement (non-productive) percentage, they had significant problems with unfilled shifts, understaffing, and overtime. Most other units at their facility struggled with staffing and overtime, likely because leadership and finance had used the flawed budget process described above for all inpatient nursing units.

The nurse manager indicated they had four 0.9 FTE RN vacant positions, two 0.9 FTE RNs on orientation, and one 0.9 FTE RN on leave. Let’s look at what the care-centric nurse scheduling formula calculates as available replacement hours for our sample unit with this information.

In A Care-Centric Approach to Nurse Scheduling, we discussed the care-centric scheduling formula, which looks like this:

Let’s review each element in the formula:

And the values that we’ll use in the formula:

Using the formula above, we can see that this unit has a negative replacement (non-productive) time scenario. Even if the nurse manager approved no time off and there were no call-ins for unscheduled time off, this unit would still be short of their core staffing on the schedule by approximately six 12-hour shifts every week.

Float pools became popular in the 1980s as a way for hospitals to mitigate staffing deficiencies without having to resort to expensive resources such as overtime and per-diem agency nurses.[3]Straw, C. (2018). Engagement and retention in float pools. Nursing Management (Springhouse), 49 (10), 30-36. doi: 10.1097/01.NUMA.0000546201.01962.0d. Float pools are often additional FTEs hired above the FTEs needed for baseline staffing for the facility. Float pools allow a facility to better respond to patient volumes and acuity greater than budgeted levels by having internal resources available for staffing.

By reallocating a portion of each unit’s replacement (non-productive) FTEs to fund the float pool, this facility has embedded its float pool in its baseline staffing. The facility effectively has no additional nursing resources available to assist with staffing above the baseline budgeted census and levels of care.

Under this budget methodology, all units would have to be fully hired and have no employees on orientation or leave to realize the best-case replacement percentage of approximately 9.5% on the units.

Based on feedback from the nurse manager regarding the state of their facility’s recruitment and retention issues, it sounds like many of their units were operating with replacement (non-productive) percentages in the low single-digit to negative replacement rates. Since FTE hours are a finite resource, when replacement is utilized at a higher rate than is available, those hours will be pulled from the patient care shifts, resulting in understaffing.

With the facility’s recruitment and retention problems, FTE vacancies and employees on orientation significantly reduce their available replacement (non-productive) FTEs for scheduling.

Due to these two budget errors, this facility does not have enough staff for its budgeted baseline staffing. When the census increases above the budgeted baseline volumes, the facility has no additional capacity that they can call up. Their staff is already working significant amounts of overtime in an effort to achieve their baseline staffing numbers. The facility has had to utilize overtime and travel RNs in an unsuccessful attempt to achieve its baseline budgeted staffing numbers.

The nurse manager said their facility struggled with significant chronic understaffing, unfilled shifts, absenteeism, and overtime. The resulting burnout of their staff was causing problems with their recruitment and retention, and they were also seeing negative impacts on quality and safety metrics. Leadership developed multiple financial incentive programs to entice their already overworked staff to pick up more overtime shifts. They eventually had to resort to hiring travel RNs to stabilize their operations but had done little to correct the foundational issues in their workforce.

Their budget process has set their inpatient nursing operations up for failure and increased the facility’s risk for adverse patient events.[4]Glette, M.K., K. and Wiig, S. (2017) Aase, The Relationship between Understaffing of Nurses and Patient Safety in Hospitals—A Literature Review with Thematic Analysis. Open Journal of Nursing, 7, … Continue reading

This facility is also at risk for lower reimbursements due to the CMS Hospital-Acquired Condition Reduction Program.

Understanding how variations in filled FTEs impact the available replacement resources is the key to creating safe and effective schedules.

A nursing unit’s budget defines a finite number of hours that the nurse manager can use before using unbudgeted resources such as overtime, per diem staff, float staff, and travel staff. The nurse manager assigns staff to patient care shifts or non-patient care shifts when making a schedule. The number of patient care hours needed to schedule for the desired budgeted volume and level of care is fixed and should not change unless the budget changes. If the required budgeted hours for patient care are fixed, then variances in FTE hours should be deducted from the replacement resources (in orange below) to preserve the hours needed for patient care.

In A Care-Centric Approach to Nurse Scheduling, I demonstrated how nurse managers could use a simple formula to determine the amount of time available to schedule non-patient care shifts while reserving the hours needed for the desired budgeted level of care.

The formula provides the nurse manager with a valuable assessment of their scheduling capacity. Nurse managers can use this information to help facilitate conversations between them, their leadership, and finance regarding resource needs and allocation.

While there have been a lot of discussions lately in the industry about mandatory nursing ratios, acuity systems, and improved use of information technology to address nursing workforce issues, the reality is that these solutions are likely years from widespread acceptance and implementation. The care-centric approach to nurse scheduling is something that nurse managers can begin using today to understand better their budget and how to manage their scarce nursing resources more effectively.

You have Successfully Subscribed!

We use cookies on our website to give you the most relevant experience by remembering your preferences and repeat visits. By clicking “Accept”, you consent to the use of ALL the cookies.
Do not sell my personal information.
Cookie SettingsAccept
Manage consent

This website uses cookies to improve your experience while you navigate through the website. Out of these, the cookies that are categorized as necessary are stored on your browser as they are essential for the working of basic functionalities of the website. We also use third-party cookies that help us analyze and understand how you use this website. These cookies will be stored in your browser only with your consent. You also have the option to opt-out of these cookies. But opting out of some of these cookies may affect your browsing experience.
Necessary Always Enabled
Necessary cookies are absolutely essential for the website to function properly. These cookies ensure basic functionalities and security features of the website, anonymously.
Functional
Functional cookies help to perform certain functionalities like sharing the content of the website on social media platforms, collect feedbacks, and other third-party features.
Performance
Performance cookies are used to understand and analyze the key performance indexes of the website which helps in delivering a better user experience for the visitors.
Analytics
Analytical cookies are used to understand how visitors interact with the website. These cookies help provide information on metrics the number of visitors, bounce rate, traffic source, etc.
Advertisement
Advertisement cookies are used to provide visitors with relevant ads and marketing campaigns. These cookies track visitors across websites and collect information to provide customized ads.
Others
Other uncategorized cookies are those that are being analyzed and have not been classified into a category as yet.
SAVE & ACCEPT