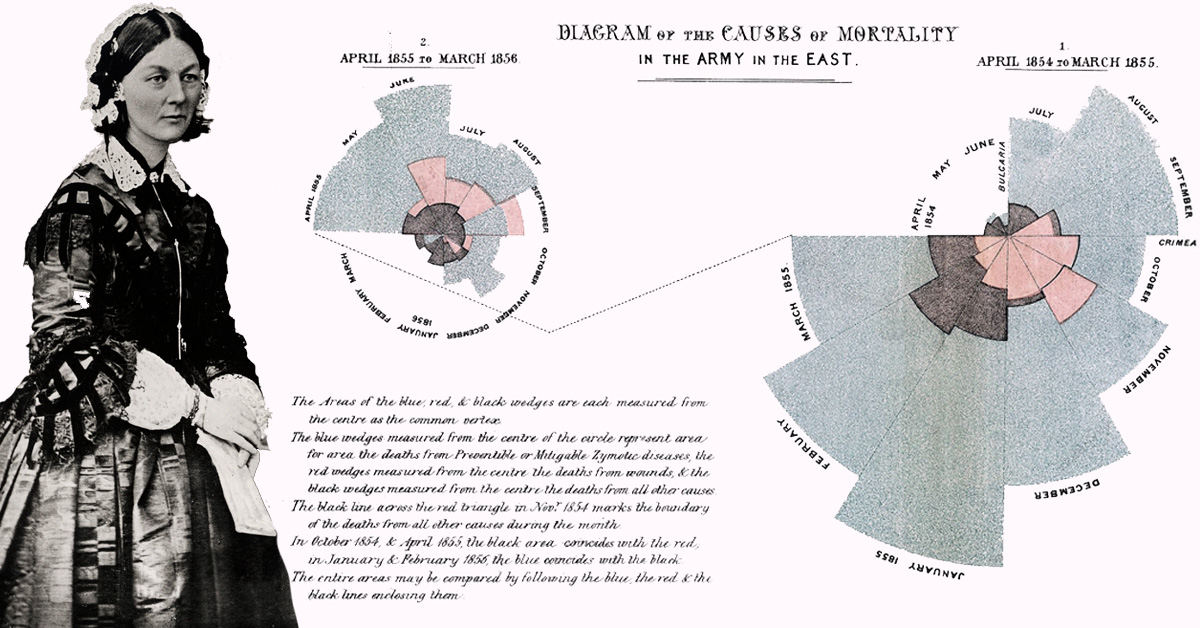 Nursing Informatics is at the Heart of Nursing

To celebrate Florence Nightingale’s birthday and Nursing Informatics Day, I thought it would be nice to share some of her history and the inception of nursing informatics and some information about an exciting new book detailing her informatics work.

With the focus on data, information, and technology, many people may think that Nursing Informatics is a new profession.

While most people know of Florence Nightingale as the founder of modern nursing, many are likely unaware that she was a statistician and the first informatics nurse.

She was also the first woman fellow of the Royal Statistical Society, joining in 1858.

Last year, Fast Company published a fascinating article titled The untold story of how Florence Nightingale used data viz to save lives. She is described as “a fierce advocate of public health—and she used sophisticated graphic design to make her case.”

Florence’s assimilation and graphical presentation of soldier mortality data were powerful enough to move the queen and Parliament to pressure the military for more sanitary conditions, ultimately saving many lives. This data also helped define the foundation of sanitary conditions in nursing care that have saved countless lives and helped prevent further injury and illness to those receiving treatment.

From the Fast Company article:

Nightingale was a lifelong information designer. As a child, she cataloged her seashell collection, and that was just the beginning. According to data designer RJ Andrews, Nightingale was always recording facts and figures. “She was mathematically literate as a foundation,” Andrews explains. Her ability to compose eye-catching, understandable, and persuasive charts that depicted things such as soldier mortality rates grabbed the attention of the queen and Parliament and pushed officials to require more sanitary treatment conditions, saving lives in the process.

The BBC Documentary, The Beauty of Diagrams, describes the above rose diagram as “one of the most influential diagrams in history.” The episode on Florence Nightingale is available on YouTube. It discusses her history, use of data to improve patient care during the Crimean War, efforts to improve healthcare after the war, and her visionary use of data visualization to make her points.

RJ Andrews is an award-winning data storyteller, author, and founder of Info We Trust. He helps organizations solve information problems. He specializes in information graphics: charts, diagrams, and data visualization.

Be sure to subscribe to our newsletter below and check periodically with the blog for details on the upcoming webinar.

You have Successfully Subscribed!

We use cookies on our website to give you the most relevant experience by remembering your preferences and repeat visits. By clicking “Accept”, you consent to the use of ALL the cookies.
Do not sell my personal information.
Cookie SettingsAccept
Manage consent

This website uses cookies to improve your experience while you navigate through the website. Out of these, the cookies that are categorized as necessary are stored on your browser as they are essential for the working of basic functionalities of the website. We also use third-party cookies that help us analyze and understand how you use this website. These cookies will be stored in your browser only with your consent. You also have the option to opt-out of these cookies. But opting out of some of these cookies may affect your browsing experience.
Necessary Always Enabled
Necessary cookies are absolutely essential for the website to function properly. These cookies ensure basic functionalities and security features of the website, anonymously.
Functional
Functional cookies help to perform certain functionalities like sharing the content of the website on social media platforms, collect feedbacks, and other third-party features.
Performance
Performance cookies are used to understand and analyze the key performance indexes of the website which helps in delivering a better user experience for the visitors.
Analytics
Analytical cookies are used to understand how visitors interact with the website. These cookies help provide information on metrics the number of visitors, bounce rate, traffic source, etc.
Advertisement
Advertisement cookies are used to provide visitors with relevant ads and marketing campaigns. These cookies track visitors across websites and collect information to provide customized ads.
Others
Other uncategorized cookies are those that are being analyzed and have not been classified into a category as yet.
SAVE & ACCEPT